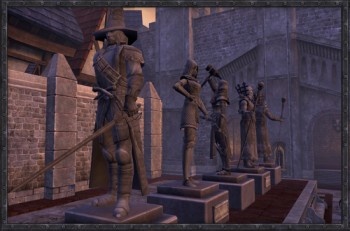 Warhammer Online is working on a novel new approach to recognize outstanding in-game achievements: A Top Ten Leaderboard system that will feature statues of the game's top players erected in city centers.

Warhammer Online already has numerous leaderboards on the Warhammer Herald that track players' greatest accomplishments, but actual in-game recognition is still sorely lacking. To help address that shortcoming, the 1.1 update, launching later in December, will feature statues of the best Warhammer players, erected dynamically in the game's cities.

According to the Warhammer Online dev diary, statue art was generated for both genders of every class in the game, at which point code was created to make the dynamic statue system essentially self-sufficient. Leaderboard data was then worked into the system, along with the means to inject the statue objects into the game, after which all that remained was testing.

"To test, we are taking data pulled from a live server as our test data for our internal servers," the diary says. "Using this leaderboard information, we then have the new dynamic statue system read it in and modify the statues based on the current leaders. Voila! Instant notoriety on our internal server." The diary goes on to suggest that other bonuses may be in store for players who earn statues, and that there may even be special rewards for "taking out" players who have statues.