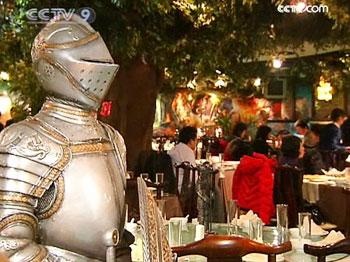 If you happen to be in China and need a place to eat, maybe you should check out the new World of Warcraft-themed restaurant in Beijing.

The decor of the new restaurant has been "inspired" by the game: The entrance is a real-world recreation of a scene from World of Warcraft's opening animation, while the dining area is called "The Hall of Snow Storms" and features a large tree at its center. Armor-clad warriors - Alliance, apparently - guard the walls, which are adorned with images taken from the game, while a large plasma television displays video from the game. Even the food reflects the game, with dishes named after various in-game characters.

The owner said he designed the restaurant to create a "comfortable gathering place" for his fellow World of Warcraft enthusiasts. Given the popularity of MMOGs in China, this place will probably be huge. Unfortunately for anyone hoping to order up some Lord Kazzak Surprize in Night Elf Sauce, the name and specific location of the eatery aren't given - concerns about licensing "issues," perhaps? At least you can look at a few pictures, thanks to CCTV International.