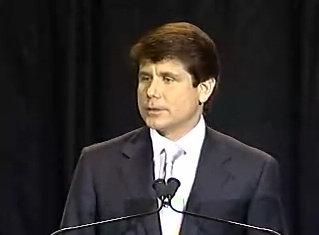 Illinois Governor Rod Blagojevich, who you may recall for his high-profile and expensively futile crusade against videogames, has something besides Grand Theft Auto to occupy his attention these days: He was recently arrested and slapped with federal corruption charges.

Blagojevich and his chief of staff were arrested yesterday on charges of conspiracy to commit mail and wire fraud and solicitation of bribery, according to a CNN report. The charges allege that Blagojevich attempted to extort payment in exchange for appointing a Senate replacement for President-elect Barack Obama, including a position at either a non-profit or labor-related organization with a "significant salary," a position on corporate boards for his wife, "cash up front" campaign funds or a Cabinet or Ambassadorial post for himself.

In a statement, U.S. Attorney Patrick Fitzgerald said, "The breadth of corruption laid out in these charges is staggering. They allege that Blagojevich put a 'for sale' sign on the naming of a United States Senator; involved himself personally in pay-to-play schemes with the urgency of a salesman meeting his annual sales target; and corruptly used his office in an effort to trample editorial voices of criticism."

Corrupt politicians are nothing new, but Blagojevich gets special notice for attempting to impose restrictions on selling violent videogames to minors, a law which was struck down by a federal court in 2005 because it violated the First Amendment. Nothing too particularly awful about that, but in response the state government blew almost $1 million unsuccessfully appealing the decision, despite the fact that similar laws in other states had been struck down for precisely the same reasons. Making matters worse, funds to pay for the appeal ultimately had to come from other state agencies, including the public health department and state welfare agency, leading State Government Committee Chairman Jack Franks to say, "We had a strong suspicion that the Governor was using funds appropriated by the General Assembly as his own personal piggy bank."

Prior to that, in 2004, Blagojevich had criticized the Chicago Transit Authority for agreeing to run an ad campaign for Grand Theft Auto: San Andreas. The ads were eventually pulled, although the CTA claimed Blagojevich's efforts weren't actually responsible for the decision, saying that the advertising contract with Take-Two was nearing the end of its run anyway.

The investigation into alleged wrongdoing by the Illinois Governor and his office has actually been ongoing since 2003, according to the complaint (available here via the Chicago Tribune, PDF format) which details numerous exchanges between Blagojevich, his Chief of Staff John Harris and numerous other individuals. In an early November conversation regarding the nomination of a replacement for Obama's Senate seat, Blagojevich said, "I've got this thing and it's f--king golden and, uh, uh, I'm just not giving it up for f--king nothing. I'm not gonna do it." He also stated that if he wasn't satisfactorily compensated, he would simply take the seat for himself. "Unless I get something real good for [his first-choice candidate], shit, I'll just send myself, you know what I'm saying."

Sadly, this level of corruption and illegal activity at high levels of State government is nothing new for Illinois. "We're all about corrupt politicians here in Illinois," said one concerned citizen, pointing out that Blagojevich's predecessor as Governor, George Ryan, is currently serving six years and six months in prison resulting from his own conviction on federal corruption charges. Robert Grant, the special agent in charge of the Chicago office of the FBI, also expressed dismay at the situation, saying, "If [Illinois] isn't the most corrupt state in the United States, it's certainly one hell of a competitor."

Blagojevich, a phenomenally unpopular Governor whose approval ratings recently slipped as low as 13 percent, was released on bail and returned to work this morning, but many of his colleagues, including Lieutenant Governor Pat Quinn and President-elect Obama, have called on him to resign. Unsurprisingly, he has thus far maintained his innocence, saying through his attorney, "He hopes the people of Illinois have faith in him because he will be vindicated."