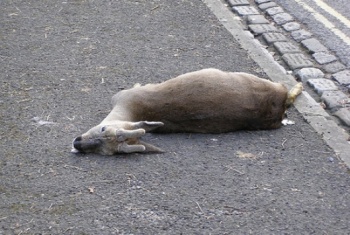 The latest scapegoat theory attempts to link violent videogames to an increased desire for young men to run out and kill Bambi.

In a recent piece published in The American Spectator lamenting the needless slaughter of wildlife, conservative writer Bill Croke draws some pretty far-out conclusions as to why games are supposedly responsible. Croke's sights are leveled at kids who play violent videogames and the parents who let them.

"My own experience observing kids playing videogames (in the Salmon, Idaho Public Library, no less) are that they always seem to involve human characters hunting down and shooting other human characters with automatic weapons, while being shot at themselves," writes Croke. "Since it's apparent that a small percentage of kids can actually suffer psychological problems from playing these games, an empathy deficit if you will, I think it might be an easy jump to get up from a computer game, go out and pull the trigger on an elk or a deer, and then walk away with a laugh. After all, it's only a game."

How exactly does Croke come to the conclusion that videogames are responsible for causing an epidemic of animals being shot and dumped across the great American countryside? He sets the stage by citing the usual studies on videogame violence. Then he notes "these wildlife atrocities are committed mostly by young men aged 15 to 22, the videogame generation." So apparently videogames are responsible simply because the age group supposedly matches up? Gotcha. Croke also adds animals should soon get a reprieve as gamers rise up and graduate to killing other humans.