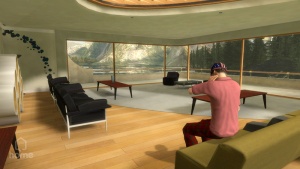 "What Home feels like is Second Life for hardcore gamers," Greenberg said in an interview with Kotaku. "It doesn't feel like it broadens the experience and invites people in."

Greenberg suggested that Home's long development time played a large part in the problem. "When they unveiled it, it seemed innovative," Greenberg said. "I think what's happened is now here we are a couple of years later and we feel beyond that. It feels like 2005 tech in 2008. I'm not sure that's what people want."

Not surprisingly, it seems that what people do want is Xbox Live, according to Greenberg. Shooting down any hopes for a future Xbox Live Gold price drop, Greenberg said that the reason they haven't (and won't) lower the price for Live's full services is because people think it's worth paying for. "I think we have seen people are willing to pay for the premium experience," Greenberg said. "When they compare Live to Home, there is still a huge gap."