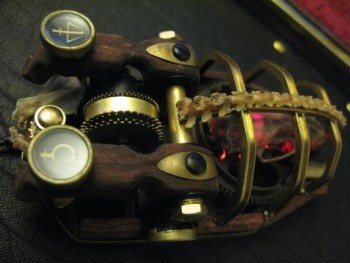 A chap by the name of Paradox has designed and built what could very well be the world's greatest custom-built mouse, a Steampunk design with wood and brass construction that incorporates a real mouse skeleton.

On display at his blog, the mouse features a wooden base mounted to a body made of brass tubing and I-beam shaped pieces, while vintage typewriter keys emblazoned with alchemy symbols serve as the buttons. The scroll wheel is covered by two hollowed clock gears and a thin strip of brass, and remains fully functional as both a wheel and a fifth mouse button.

After that, it gets a bit weird. The builder just happened to have a complete mouse skeleton in a box (hey, don't ask me) and decided to incorporate parts of it into the design. The mouse skull was affixed to a large gear which was then placed over the device's circuit board, and an LED was inserted through a small hole drilled in the skull, making it glow when the mouse is moved. The creature's spine was laid into the mouse "rib cage," running the length of the device, while the rodent's shoulder blades were attached to the front, where the wire connects. Finally, a pair of 9mm shells were attached to the back for added decoration.

Tying up the package is the mouse pad, made from scrap Victorian wooden trim, brass trims and rivets, and mini wood corbels purchased at a local hobby shop. The whole package took roughly 22 hours to assemble at a cost of $40-50, using just a bench grinder, a Dremel, coping saw and a lot of JB Weld. Oh, if only I had that sort of talent - but I can't even sew a bantha.

You can see this awesome Steampunk computer mouse in all its glory at The Tentacles. While you're there, be sure to have a look at his neo-Victorian keyboard and monitor, an earlier project that actually inspired the construction of the mouse. This stuff is not to be missed.

(Thanks to Boing-Boing for the hookup.)