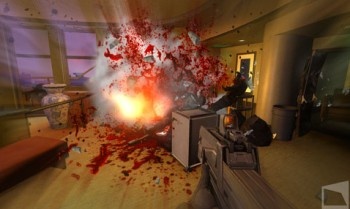 Good news from the land Down Under: The Office of Film and Literature Classification has decided that F.E.A.R. 2: Project Origin isn't so bad after all, and has awarded it an MA15+ rating.

In late November we found out that F.E.A.R. 2 had been refused a classification in Australia, forbidding its sale in the country. The R.C. decision was the result of the game's "high-impact" violence, enhanced graphics and realistic behavior of enemies in the game. "The Board considers that the cumulative effect of this type of violence is high and as such cannot be accommodated at the MA15+ classification and the game must therefore be refused classification," OFLC Director Donald McDonald wrote.

But according to a Games On Net update, F.E.A.R. 2 publisher Warner Bros. Interactive Entertainment went to the mat on this one, and actually won. It's unclear whether there was a second review process or an appeal of the original review, but whatever the case may be the OFLC has now apparently decided that the game is alright for teenagers after all, giving it an MA15+ rating for "Strong violence, blood and gore. Moderate coarse language."

"After considering extensive submissions and demonstrations of game play across all levels, the Review Board concluded that the level of violence in the computer game, whilst strong, could be accommodated within the MA 15+ classification," said Trevor Griffin of the Classification Review Board.

The new rating was given despite no changes being made to the game since the original R.C. decision that was issued last month. A WBIE spokesman said, "We're obviously extremely pleased with the result from the Classification Review Board, it's a great result for Warner Bros and fans of the franchise. We always believed in the merits of the game as an MA15+ title, and we went in and argued the game on its merits. We're really really pleased that they came up with the decision that they did."

This little piece of good news doesn't change the fact that Australia's game rating system is inherently dysfunctional, but it's a bit of a day-brightener if nothing else. Now Australians can join with the rest of the world in a more conventional F.E.A.R. 2 vigil: Waiting patiently and hoping it doesn't suck.