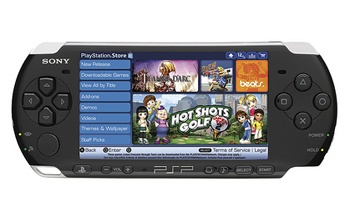 Despite Sony recently stating the contrary, Eurogamer reports that the PlayStation Portable is due for not only an update, but a successor as well.

Ask an adopter of Sony's recent PlayStation Portable update, PSP-3000, what they'd like to see out of the handheld system and they'll probably tell you they'd like to see another revision of the brilliant (built-in microphone, incredibly bright screen), but flawed (the screen is secretly terrible) update. According to a report filed by Eurogamer, that wish may come true as their publishing sources (who are to remain anonymous, of course) tell them to expect a new model of the PlayStation Portable in late 2009. As far as rumors go there's plenty to believe in as Sony has refreshed the console in the Fall season for the past two years running.

The second part of Eurogamer's report is a bit more difficult to swallow. According to the same sources, Sony is currently planning a successor to the PSP and what's more, developers are already at work on games for it. This flies directly in the face of an interview done last week with SCEE president David Reeves, in which he said that, "there are currently no plans for a PSP2. I go to Tokyo quite a lot and no one has referred to it - I think they have their hands full at the moment."

As the PlayStation Portable continues to be a silent success for Sony, everyone is expecting them to come out with a new system eventually, but for now there's no rush. The system has been bolstered in Japan due to the success of Capcom's Monster Hunter series and in the rest of the world, its multimedia capabilities (and ease of pirate trickery) continues to push it towards strong sales. When asked for a comment on these rumors, Sony UK told Eurogamer that it would not comment on rumor or speculation.