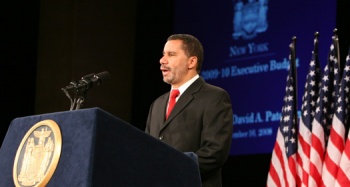 Downloadable content for games, music, movies and more will come with a local and state sales tax in the state of New York if a proposed state budget is passed.

Responding to the dire economic times, New York governor David Paterson has proposed a revised state budget which would ease the burden on state and local governments by cutting jobs and services and raising taxes, including an "iPod tax" that would require downloadable content to be subject to the same taxes as anything purchased at a regular brick-and-mortar shop. The budget document proposes to close the digital property taxation loophole by imposing "state and local sales tax on purchases of prewritten software, digital audio, audio-visual and text files, digital photographs, games and other electronically delivered entertainment services to achieve tax parity."

The implications of this for iTunes are annoying but perhaps more significant when you think about what it could mean for Xbox Live. With the Microsoft Points system structured the way it is currently, you have to buy points in inconveniently proportioned units determined by Microsoft. You know, there's always 100 Points left over after you buy something. If the sales tax were to come into play, would it knock Microsoft's carefully arranged Points system out of balance since things would suddenly cost a bit more than an even amount of Points? Would that inevitably mean that we'd have to shell out for more or that we'd finally be able to spend those extra spacebucks to cover the sales tax. Either way, if you still want to buy that armored horse in Oblivion and live in New York, do it now.

Paterson's budget has more serious consequences beyond whether or not we're paying more for Katy Perry songs or Xbox Live themes. It also calls for a reduction in school aid and layoffs for 521 state workers, among other things. "We're going to have to take some extreme measures," Paterson said. "Maybe we should have thought about this when we were depending on what we thought was inexhaustive collections of taxes from Wall Street - and now those taxes have fallen off a cliff."

That aside, Paterson's rationale for arguing for the DLC tax is to close a loophole and "achieve tax parity." Is this a legitimate claim? Should downloadable goods be subject to sales tax - would that be more fair? What do you guys think?