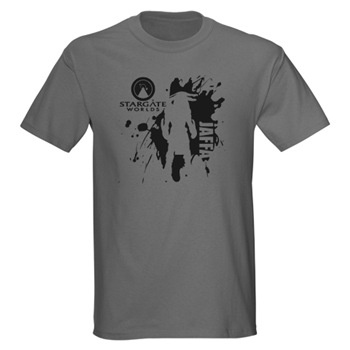 T-shirts, sweatshirts, hats and even stickers are available for purchase, featuring the official Stargate Worlds logo as well as all-new designs made specifically for the store. T-shirts are available in multiple colors and designs for Soldiers, Goa'uld, Asgard, Jaffa and more, while the sweatshirt designs include a rather stylish hoodie with the Stargate Worlds logo printed above the left breast. More products are expected in the near future, and the Cheyenne Mountain team is also taking requests for particular items or designs.

The "store first, game later" approach may appear odd, but under the current circumstances it's not terribly surprising. Earlier in December it was revealed that the developer was essentially out of money, and that employees hadn't been paid for over three weeks at the time. (That no-pay period has now stretched to five weeks; keep an eye on the situation at days-since-cheyenne-mountain-employees-have-been-paid.com.) There's been no update on the status of the studio or the game since then , and the studio may be looking to scrape up enough bucks to keep the lights on for a day or two longer by going live with the store now.

The stuff is a little pricey, but it's a win-win for Stargate-loving gamers. If Cheyenne Mountain is able to complete and release the game, you can take pride in having done your part to help them to the finish line; and if the whole thing collapses under its own weight and never sees the light of day, your sweatshirt or hat will skyrocket in both rarity and value, becoming an instant collector's item. So stop being so cheap and pony up a few bucks at the official Stargate World Store. You'll be a better person for it.