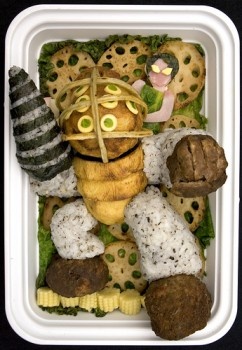 It's Friday, and that means it's time for a Videogame-Themed Bento Box Picture Show, courtesy of someone who has far more talent and spare time than I do. (Seriously, check these out.)

Created by "Anna the Red," these game-themed bentos feature designs including Rayman Raving Rabbids, Super Smash Bros., BioShock, Portal and many others. I have no idea how much work is involved in making one of these, but they're awesome and if my girlfriend made one for me (as the original poster had them made for him), I'd feel way too guilty about cramming all that time and effort down my gullet to even think about eating it.

For those who don't know, a bento is a single-portion takeout meal common in Japan, usually consisting of rice, fish or meat and some form of pickled or cooked vegetable as a side dish. They're available in "bento boxes" that range from cheap disposable trays to elaborate, hand-crafted containers, and apparently putting this kind of effort into making an appealing lunch isn't uncommon. Yes, I lifted that directly from Wikipedia: Where I live, we have McDonald's.

Check out the full set of videogame themed bento boxes on Flickr, and if that's not enough hot bento action for you, check out the creator's blog at Anna The Red's Bento Factory.