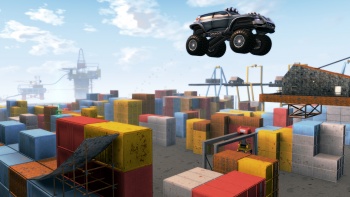 Key members of Crackdown developer Realtime Worlds have founded a new studio and are being funded by Microsoft specifically to develop Crackdown 2, according to reports.

A significant number of staff members resigned from Realtime Worlds a couple weeks ago to form a new company, Ruffian Studios. According to videogaming247, who have it supposedly "on good authority," Ruffian is being funded by Microsoft specifically for the purpose of developing a sequel to Crackdown. Contacted for confirmation, a Realtime Worlds spokesperson declined to comment, claiming it would be "against the data protection act."

Sounds like hearsay, but there's some genuine meat to the rumor. Ruffian initially came to light via a Flickr album showing the studio's fancy new digs. More importantly, the photos feature some key Realtime Worlds staff who played a central role in the development of the first Crackdown: lead designer Billy Thomson and Gaz Liddon, who worked on the art and physics team. Furthermore, Microsoft hasn't been exactly bashful about dropping major hints that Crackdown 2 was in the works. "I'm here to tell you on behalf of the community, I want - we need - another Crackdown," said Larry Hryb, Xbox Live's director of programming on his podcast. "That's all I'm going to say, so you don't have to confirm or deny anything. I'm just saying we want it."

With Realtime Worlds busy developing APB, a cops-and-robbers MMOG set in a city, the founding of Ruffian to develop Crackdown 2 seems like the best solution for everyone. For Microsoft it means more Crackdown which means more money, naturally. For Realtime Worlds it means that resources won't have to be split between two major titles. Most importantly, for fans, it means that the series stays in the hands of the people who made it great.