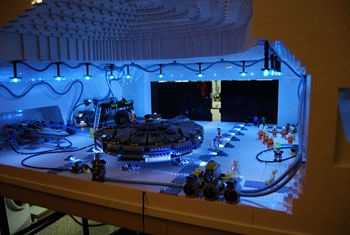 Lego. Is there anything it can't do? Probably, but recreating one of the most epic battles in the Star Wars canon isn't one of them.

The scene, made up of around 60,000 Lego bricks and covering fifty square feet, was the Grand Prize winner of the recent Lego Star Wars Building Challenge.

Travellers Tales, eat your heart out!