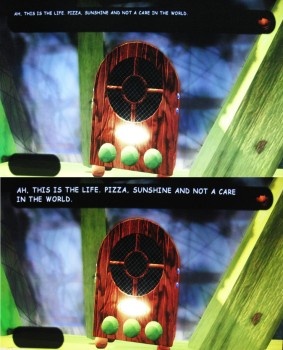 Rare has released a title update for Banjo Kazooie: Nuts & Bolts that fixes the problem some standard-definition television owners were experiencing with the game's small text.

Complaints began with the demo release of the game, when users pointed out that in-game text was small and difficult to read on some SDTV sets. Initially, Rare acknowledged the problem but said it would be "too expensive" to fix. "Unfortunately, this is an issue that doesn't look like it will get changed," Rare Community Manager George Kelion told CVG. "I don't want to bore you with the technical side of things (I really don't understand it all myself), but the long and the short of it is that the text you see in the demo will be the same as that which you find in the retail version of the game."

The minds at Rare apparently changed fairly quickly, however, as a few days later Xbox 360 Fanboy revealed the studio would in fact be releasing an update to the game, expected within 30 days. They missed that mark by a few days, but now the fix is out there. The new title update adds a "Large Dialogue Text" setting in the game's display options, which significantly increases the game's text for people playing on older and/or smaller televisions.

The moral of the story? It's hard to put a price tag on good P.R. Thumbs-up to Rare for taking care of things so quickly.