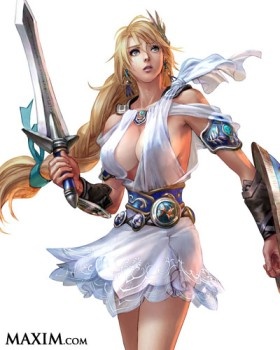 This year's list of pretend hot chicks is a diverse one, covering a wide range of game genres, and even includes a few real women, albeit women dressed up as ridiculously under-uniformed special forces soldiers. The one and only non-fiction female in the list is tennis star Maria Sharapova, who appeared in 2K Sports' Top Spin 3, and while her real-life hotness is unquestionable the image taken from the game has fallen so far down into the uncanny valley that how it qualifies as anything but creepy as hell is utterly beyond my comprehension.

Some entries in the list are traditional gamer favorites - Lara Croft, anyone? - while the inclusion of Street Fighter heroine Chun-Li is indicative of nothing so much as a determination to include 17 game babes come hell or high water. And while the undead-killing skills of Left 4 Dead's token female Zoey may be admirable, does she really qualify as "hot?"