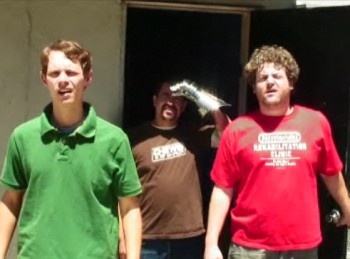 Gold, a web series that debuted last month with a wonderfully funny prologue, has launched its first "real" episode - and two years after that sneak preview, things are very different for everyone.

A quick refresher: Gold tells the tale of five professional Goblins & Gold players in training for the world G&G Championship, at which they'll represent the United States against the other nations of the world, including their arch-rivals from the British team. After taking silver for three years running, the team is hungry for victory.

But all is not well within the ranks: Team captain Jonathan Drake is struggling with a devastating, possibly career-threatening injury, while the rest of the team works to come to grips with the erratic behavior and style of gaming superstar and prodigy Richard Wright. The G&G World Championship is just over five weeks away: Will the American team be ready to fight for Gold?

We've covered Gold previously, but with the launch of the "real" series, an update and a reminder to check this thing out is in order. The writing and acting are excellent, and the series is aimed squarely at people who have been there and played that - in other words, people like us. Watch the first episode, find out more about the story, the cast and crew and have a look at some great t-shirts at goldtheseries.com.