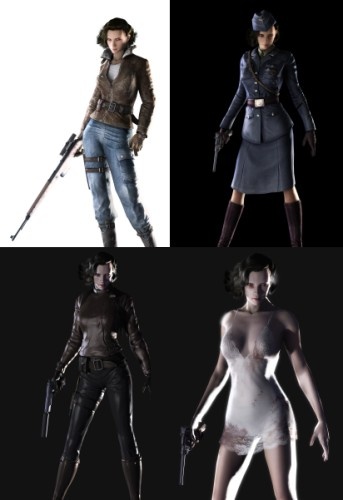 She stalks her prey with ruthless efficiency, a sleek predator in an era of brutish savagery. She moves - she strikes - she takes off her clothes. All in a day's work for the Velvet Assassin.

What could be better than a mix of intense stealth action and Nazi killing behind enemy lines? Tits, apparently. Violette Summer, the eponymous Velvet Assassin, will have several outfits at her disposal throughout the course of the game, not least of which will be a hot, slinky lace number that even the developer admits serves no actual purpose whatsoever.

"From day one the developers at Replay Studios knew they didn't want to simply sensationalize one of the most tragic wars in human history, but to give gamers one of the first true-to-life experiences," the studio said in a press release. "An integral part of that mission was to provide players with an intriguing view of the war by portraying a strong, yet normal woman, not only in physique - but also in the reality of her abilities."

Normal, eh? I don't know about Violette's in-game abilities but as far as her physique goes the only thing separating her from Lara Croft territory is a ridiculous pony-tail. And while her conventional game duds earn a nod for their practical value, Replay isn't fooling me: These outfits are all sex, all the time. The Arthur Fonzarelli-inspired Pilot Outfit is pure, raw hotness, while the Leather Sneaking Outfit is more like the Leather Mistress Outfit. Seriously, who sneaks around behind Nazi lines in skin-tight, knee-high calfskin boots with heels? Great for the Dungeon, maybe, but not so much for occupied France.

Speaking of the Nazis, Velvet also owns a full-on Nazi Officer's Uniform, complete with - again - those crazy "do me" boots. A handy kit for moving undetected among the enemy, arguably, but don't try telling me that Max Mosley is the only man in the world with She-Wolf of the SS fantasies.

And then, finally, there is that hot, slinky "Night Dress," an outfit both wholly unnecessary and absolutely obligatory. "This outfit is completely unsuited to any of the exploits that Violette will undertake, but that's the point," the press release explains. "The entirety of Velvet Assassin is actually a flashback, with Violette remembering her efforts while in a coma. Whenever players get into a tight spot in the game, they can go into 'Morphine Mode' which simulates Violette getting an injection of the drug from her nurse to calm her down as she lives out the horrific memories of war in her violent dreams. When this happens, the action slows down and the world around her becomes more of a dreamscape, and whatever Violette was wearing is temporarily exchanged with the nightie she's garbed in at the hospital."

Which is possibly the worst excuse for working some T&A into a game I've ever read. I can see the email from the producer now: "We need boobs, boys, and I'm not too particular about how it happens!" Mission accomplished: The funbags are in, and plausibility is out. Is it beating a dead horse to point out that while the clothes disappear, the gun doesn't? Or perhaps I should call it a pistol; the guns are obviously the point.

Velvet Assassin is currently in development for the Xbox 360 and PC, and slated for release in April 2009. To learn more, check out the official site at velvetassassin.com.