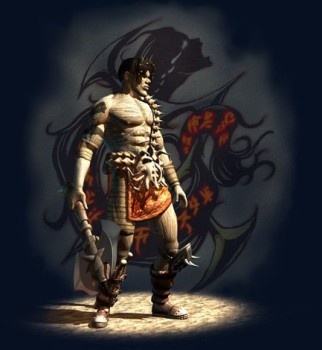 A series of mods for the classic RPG Planescape: Torment has been released, giving both RPG veterans and gaming newcomers a good reason to take a look at one of the finest games ever made.

Posted at Spellhold Studios, the latest versions of "Qwinn's PS:T mods" enhance and fix the game and also add significant amounts of content that was unfinished when the game originally launched, including quests, characters, items and banter. The first mod, the Planetscape: Torment Fixpack is an update that fixes "literally hundreds of bugs and thousands of typos, thereby restoring a lot of lost and inactive content." Changes range from small errors in spelling and grammar to wholesale modifications to items like Dak'kon's Zerth blade and even entire areas like the Tenement of Thieves that cause them to function more like they were originally intended to.

The second mod, called Planescape: Torment Unfinished Business, restores the "not-quite-finished" content that shipped with the game, polishing and completing it so it can be fully integrated into game world. All-new citizens, characters, items and even complete quests that were contained in the code but not available in the final game have been brought to life in 18 different components.

Qwinn's Planescape: Torment Tweaks, the final mod in the set, adds "ease of use" tweaks to the game, including some improvements to gameplay mechanics, user-selectable settings for maximizing hit points during level-ups, a banter accelerator that lets players experience all 78 fully-voiced banters that shipped with the game (rather than the dozen or you'd normally hear), some outright cheats and more.

Developed by Black Isle Studios using BioWare's Infinity Engine, Planescape: Torment made use of an unfamiliar D&D setting, came packaged in one of the ugliest game boxes ever conceived and, perhaps unsurprisingly, tanked horribly. Yet the game itself was, and is, one of the finest fantasy RPGs ever created, earning near-universal praise from critics and worshipful adoration from those who have actually played it. Ten years later, despite being the weird little brother of Baldur's Gate and Icewind Dale, it remains a high-water mark for computer RPGs.

The only downside to these mods, according to GameCyte, is that they won't work with the GameTap version of the game. Forget about eBay unless you're a recent lottery winner, as the few copies available there are selling for around the $100 mark. A jewel case release made the rounds a few years ago and is likely still available with some hunting, or if you have any old-school gaming friends with good taste in what they play you can always take the "mooch and play" route. It's an effort worth making for any RPG fan.

Download links for for Qwinn's PS:T mods, along with a full list of fixes and updates, are available here.

The Needles: I Want My D&D Andy Chalk 55 Comments