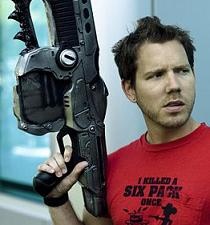 "FakeCliffy_B", as he is now known as, became internet famous for his parodying of Gears of War designer and gaming playboy Cliff "Cliffy B" Bleszinksi on micro-blogging site Twitter.

"Cliffy B" made a name for himself by updating his page with satirical comments on the games industry. One loving comment on Sony's Home read, "My guy in Home isn't nearly buff enough, and I can't kill anything. Home sucks."

Epic discovered the page, which is run by two anonymous individuals, notified Twitter and had the page renamed and the old one locked due to "allegations of copyright violations."

For more entertaining Tweets, hit the Escapist homepage and follow the staff's activities on the Watercooler.