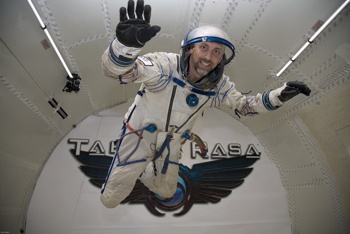 Less than two months after he walked away from videogame development in order to "pursue other interests," Ultima mastermind Richard Garriott says he's ready to make a comeback.

Following his 12-day trip into space aboard the International Space Station, Garriott announced in November that he was leaving Tabula Rasa publisher NCsoft, and game development as a whole. "That unforgettable experience [on the ISS] has sparked some new interests that I would like to devote my time and resources to," Garriott said in a statement on the Tabula Rasa forums. "As such, I am leaving NCsoft to pursue those interests."

But now, as part of a brief 2008 retrospective on gaming for the BBC, the famed designer said he's ready to pick up where he left off. "After 25 years at Origin, the last thing I wanted to make was yet another medieval fantasy game," he said. "Now, after a very interesting break, I'm keen to get back into the fray and work on a new game. Probably medieval fantasy and probably online; there's something very powerful about getting people together."

Despite the failure of Tabula Rasa, Garriott is apparently still committed to MMOG development. "If I had to pick a developer who has done a bang up job, it would be [World of Warcraft developer] Blizzard," he continued. "The number of people they have converted is just amazing. They have shown all of us what good game development is all about."

What Garriott actually has in mind for his next project is a mystery. Will he retreat to the familiar stomping grounds of Ultima, or is he preparing for another excursion into new and uncharted territory? In either case, we can only hope that lessons have been learned, not only in game design but in managing expectations. Tabula Rasa was heavily hyped as a revolutionary step forward in MMOG development and when it failed to deliver, the backlash was considerably stronger than it might have been otherwise. The only safe bet in all this: Whatever he does, it won't be with NCsoft.