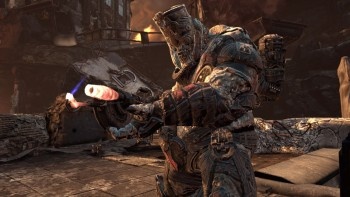 Epic plans to release a major title update for Gears of War 2 this month that will fix multitude of exploits in online multiplayer while adding a few minor features.

Though nothing is set in stone release date-wise, Epic's Mark Rein announced in a forum post today that "all indicators are [the patch] will go live within January." The update will focus on clearing up some of the small annoyances that have plagued Gears 2's multiplayer, mostly bugs and exploits that have allowed some opportunistic players (read: cheaters) to break the game by doing things like meleeing through walls, having infinite Lancer ammo or equipping a shield and a two-handed weapon at the same time. Other changes include a more reliable shotgun in laggy matches, a penalty for quitting matches early and more protection against planted grenades and chainsaw attacks.

And, since, as Rein put it, "we know you folks love achievements," the patch will include new achievements for the recently released DLC maps, achievement tracking for the War Journal and more frequent achievement progression alerts. I personally find it pretty annoying to be constantly bombarded with "you've killed X number of aliens you are totally rad!" messages, I know a lot of gamers like their Gamerscore egos to be constantly stroked, so I can see Epic's reasoning here.

"This is just a very small list of the things that will be in the next title update," Rein added, so expect to see more info on possibly more substantial changes to come from this patch in the near future.

Experienced Points: When is a Game Done? Shamus Young 31 Comments