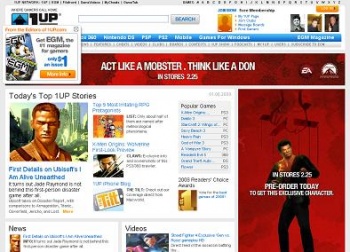 A post on PaidContent has led to muttering that Electronic Gaming Monthly will publish its last issue this month and that the 1UP Digital Network has been sold to Hearst Corporation.

While the post on PaidContact has been taken down, the original text is still visible through an RSS feeder, as What They Play quoted in its entirety in its post:

Looking to conserve its resources for its PC Mag Digital business, Ziff Davis Media has sold off the 1UP Digital Network, its collection of video game sites, to Hearst Corp., which will fold it into the UGO Entertainment division, the companies said. In conjunction with the sale, the related print mag Electronic Gaming Monthly will publish its last issue this month. Terms of the deal were not disclosed.

Since finishing up its Chapter 11 proceedings last summer, Ziff Davis has sought to devote more energy to building up the PC Mag online network. Before this, Ziff Davis' biggest step in the streamlining process involved the shuttering of PC Mag as a print product in November. As for Hearst's UGO, the addition of 1UP's sites is designed to further consolidate its efforts to build up content for gamers since Hearst bought the 11-year-old male-centric entertainment company in July 2007.

While no additional comments were forthcoming from any of the potential parties involved, further details will apparently be on their way by tomorrow morning. Of course, Ziff Davis has been up for sale for ages, and the end of EGM has been speculated about for a good while now.

Update: As it turns out the original story is true as Ziff Davis has officially announced its acquisition by Hearst Corporation and its content portal, UGO Entertainment. While certain people would like you to "celebrate this major news for 1UP," those who were laid off today would most likely prefer that you don't. With the deal came a massive string of layoffs, tallying up to well over 30 unfortunate souls ranging from 1UP, GameVideos and the now shuttered EGM magazine. Joystiq has a full list of the departed which you may feel free to cross reference against their current staff page. We here at The Escapist would like to send out condolences for those who found themselves without a job today and hope that they all land on their feet sooner than later.