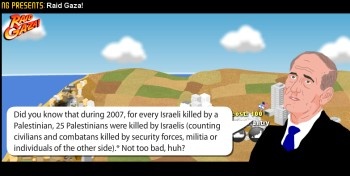 The Israeli incursion into Gaza has spurred virtual protests in Second Life as well as the creation of at least one Flash game that decries what the creator feels is the unwarranted and excessive force used in the attack.

Protests at the virtual nation of SL Israel, which features models of sites like the Temple Mount as well as various tourist hot-spots in Tel Aviv, began last week, not long after Israel launched an air campaign against Hamas forces in Gaza in retaliation for ongoing rocket attacks against the country. According to Beth Odet, one of the co-creators of SL Israel, the protesters who came to the site weren't there to discuss the matter rationally. "Lots of yelling," she told New World Notes. "They were going on and on with slurring obscenities about murderous Israeli forces, etc."

She began kicking out the worst of the protesters, although she said she was careful to ensure she didn't remove people who hadn't actually done anything wrong, but the influx continued until she was ultimately forced to close SL Israel to outsiders entirely. "Just shut it down for a little while," she said. "Just to make it stop. 'Cause people weren't wanting to be logical, or talk."

Meanwhile, a Flash game posted at Newgrounds called Raid Gaza! presents the author's clearly one-sided opinion of the conflict as little more than Israeli expansionism based on the flimsiest of pretexts. The game puts players in command of the Israeli Defense Force, called to respond to a Hamas rocket attack against the city of Sderot. Nominally an RTS, the twist in Raid Gaza! comes from the fact that the game isn't just politically one-sided, but literally so: While players have access to infantry, tanks, attack helicopters, jet fighters and limitless financial aid from the United States, the opposing Palestinian forces can do little more than toss out a poorly-aimed Qassam rocket every five or six seconds.

The point of the game, obviously, is not to win - that conclusion is foregone - but to ensure the ratio of Palestinian to Israeli deaths is as high as possible. At the end of the game, an image of Israeli Prime Minister Ehud Olmert pops up to grade the player, and then offers a tidbit of information regarding the real-world ratio of deaths in the conflict.

Responses to the game on Newgrounds have come fast and furious, and much as in Second Life, reasonable discussion is largely outweighed by heavily-biased responses in support of both sides. The potential for virtual communities to engage individuals and help foster dialog in conflicts is immeasurable, but it looks like there's still a long way to go before we get there.