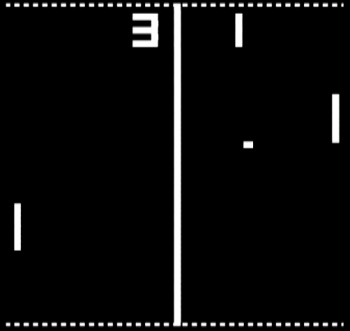 While it wasn't the first videogame (or even the first ping-pong videogame), there's no question that Pong was the catalyst for the birth of the modern gaming industry. Gamasutra has a great article up about the creation of Pong and how one little black-and-white game started it all.

Of course, as the article itself points out, telling the story of Pong isn't exactly treading new ground. It was a massive breakthrough moment, and has been understandably scrutinized pretty thoroughly by countless enthusiasts and scholars over the past quarter-century. What Matt Barton and Bill Loguidice are trying to do, however, is put the game in its proper context and show that it wasn't just a random flash of brilliance:

[Nolan] Bushnell and [Al] Alcorn, much like Jobs and Wozniak (the two Steves who founded Apple), are cultural heroes who are too often portrayed as mad scientist-types, geniuses who woke up one morning, shouted "Eureka!" and went about creating the world's first video games and personal computers, respectively.

In this case, "context" includes going back to the days of World War II and the creation of ENIAC: a machine built to aid in calculating ballistic firing tables, which up until that point had been done manually by female mathematicians called - wait for it - "computers."

If you've got 15-20 minutes to burn, it's a pretty interesting read. Perhaps the next time you play a visually stunning game like Crysis, you'll remember that it wouldn't exist if it weren't for Pong - which itself might not have existed if it hadn't been for the right things falling into the right places at the right time.

Also, you now have the "Bleep ... bloop" sound effects stuck in your head.