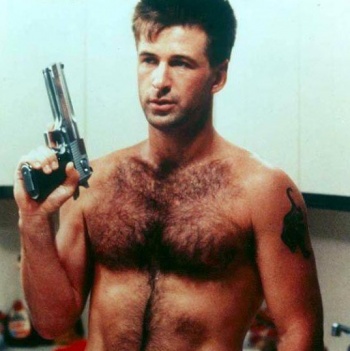 What do Galaga and cocaine have in common aside from being two addictions of choice during the raging 1980s? Alec Baldwin, that's what.

Baldwin, to nobody's surprise, seems to have done his fair share of cocaine during that age of decadence. Being a budding soap opera star and in possession of a chestful of hair that would put Wolverine to shame, Baldwin lived a life of excess that regularly included all-night coke fests that, when they didn't end on the floor of some stranger's apartment, found him standing in front of a Galaga cabinet, blasting away at aliens in Namco's classic shooter.

"I would play video games from, like, 9 a.m. to 11 a.m., and I would wind down. Then I'd go home and go to bed," Baldwin related in "Moments of Clarity," a new book about addiction. "This was the only way I could go 'beta' and go into that state I needed to be, where I could calm down and take my mind off everything. I didn't want to see anybody, talk to anybody, deal with anybody."

The owner of the parlor Baldwin frequented, a man named Julian, pitied Baldwin, who would show up before the place even opened so that he could get what he needed for his comedown. As Baldwin relates it: "Julian would put the key in the lock and open the door, and he would just kind of look at me like, 'Wow, I'm glad I'm not you.'"

To which Baldwin would respond: "You got no idea, Julian. Julian I need you. I need you to get that key and open the f---ing door and let me in. I got to play Galaga."

It's not like celebrities these days don't do drugs, but are they using videogames like Baldwin did? If so, what the heck are they playing? Do you think Lil Wayne goes home after a syrup-addled night on the town and pops in Gears of War to unwind? Nah, he's probably more of a Braid kind of guy.