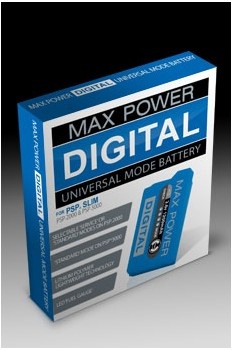 U.K. electronics company Datel is feeling the sharp sting of Sony's legal department after being sued over its plan to release the Lite Blue Tool, an after-market battery that would have facilitated hacking on the PSP-3000.

"Would have" facilitated hacking, because Datel has apparently decided it's not interested in taking a litigational smackdown from Sony over the matter. In a statement posted on Portable Video Gamer, the company said, "Due to legal action by Sony Computer Entertainment Europe we are currently not able to fulfil orders for the Lite Blue Tool Battery. Any orders received for this product have not been processed and no charges have been made. We will inform customers about availability of this product when this situation has been resolved."

References to the Lite Blue Tool have been removed from Datel's CodeJunkies website, and the battery has been replaced by the Max Power Digital, a battery that can "put a PSP2000 into service mode or work as a normal battery on PSP2000 and the brand new PSP3000." Portable Video Gamer says it's "likely" the suit is based on the existence of Sony's proprietary code in the Lite Blue Tool, which the company could claim is an infringement of its copyright.

Hacking on the PSP is done by way of EEPROMs contained within particular batteries, that put the device into "service mode" when used. Original PSP batteries can be converted to allow the activation of service mode, and Datel sells pre-modified "Tool batteries" for use with the original PSP and PSP Slim models. It's a bit of a sticky wicket, with arguments both for and against the sale of such devices: While they undoubtedly facilitate and encourage piracy, they also have somewhat more legitimate uses like running homebrew and, as Datel puts it, "free public domain applications and games from the internet."

According to Gamasutra, piracy has been a "particular problem" for the PSP, although after the late 2008 launch of the PSP 3000 model , which is apparently much tougher to hack than earlier versions, Sony said piracy on the system appeared to be "trending down."