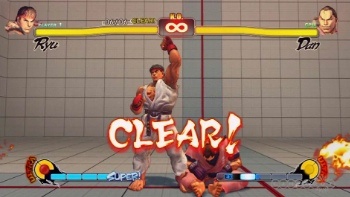 Anticipating a glut of new fighting fans, Capcom is turning to an old solution to not only train the next generation of Street Fighters, but to push veterans to their limits as well.

If you're one of the many gamers excited over the console release of Street Fighter IV on February 17, but either your old skills have rusted over or you're just not sure if you can compete, fear not. Capcom's got you covered.

Upon starting Street Fighter IV, "Trial Mode" will be just one of the many gameplay options presented to players, located under the "Challenge" option. Other gameplay modes part of challenge include time trial, which tracks how quickly one can complete the arcade mode, and survival, which throws an endless gauntlet of opponents your way until you're defeated. Trial is different in that it acts like the training modes found in other fighting games, only with an actual regimen to follow, much like the Expert Training mode found in the 1997 PlayStation fighter, Street Fighter EX Plus Alpha. While other fighting games such as the Virtua Fighter and Soul Calibur series' have offered similar options in the past, they tend to stop at simply the special moves lists, where Street Fighter IV's trial mode is intent to teach you all there is about the game, from the very bottom to the top of the mountain.

"I want to make it clear that it starts you with actual basics," explains Capcom's resident Street Fighter expert and senior community manager, Seth Killian. "It begins with normal moves, then it goes on to specials, supers, ultras, two-in-one combos, chains into specials, links into specials and then finally, how to put it all together. We teach you what the pros refer to as 'bread-and-butter' combos, as well as focus cancel techniques that are useful to your particular character. So in that way, it's definitely challenging, but in my opinion its a rewarding challenge. You're not just beating your head against the wall, and if you can come out the other side, you'll find that you're really on the path to becoming great at the game."

For every character in Street Fighter IV there are six levels of trials to conquer. Killian expects that while newcomers to the series may begin to have trouble at the second or third levels, even those who are familiar with the series may find themselves running into problems by the fourth. The point of trial mode, however, isn't to simply throw a ton of flashy combos at the player in order to defeat them, but to teach them legitimate technique.

It does, of course, get ridiculous and down-right frightening at its peak, with the final trials intended to be taxing to even the most skilled of players.

"Oh yes, it get crazy," laughs Killian. "Most advanced players will probably start to actually fail around level four with most of the characters. I made sure there's some brutal stuff in there, but I'd also consider myself to be in the bottom 10% of competitive players when it comes to executional [sic] skills. That said, if there was anything serious that I couldn't perform in less than ten tries, it was cut immediately. It gets pretty damn hard."

"I mean, it's doable, of course, but you'll see like a cross-up into chain into link into focus cancel and EX attack into ultra combo -- stuff like that."

If you understood all of that, congratulations. You may just be a Street Fighter prodigy yet. Ridiculous combos aside, Seth is confident in the ability of trial mode to convert even the most hopeless of scrubs into full-blown competitors.

"Anyone who completes trial mode will be a legitimate threat in competition. That is my promise. I guarantee that, at the very least, you'll be able to squash your friends. Learning combos won't win you matches, of course, but you'll be able to make the most of your opportunities so people will say, 'Damn! I could lose to this scrub!'"