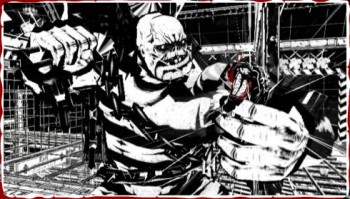 Despite the best wishes of the Daily Mail and Mediawatch-uk, the upcoming Wii bloodfest MadWorld will be hitting U.K. shelves uncut.

Back in August 2008, the Daily Mail criticized the game, calling it the "most violent videogame ever" and suggesting that its release would spoil the image of the "so-called 'family-friendly' Wii." That opinion was endorsed by John Beyer, director of Mediawatch-uk, a group that "actively campaigns for socially responsible broadcasting and against content that is offensive and harmful, for example violence, swearing and pornography."

"I hope the British Board of Film Classification (BBFC) will view this with concern and decide it should not be granted a classification. Without that it cannot be marketed in Britain," Beyer said. "What the rest of world does is up to them. We need to ensure that modern and civilized values take priority rather than killing and maiming people. It seems a shame that the game's manufacturer have decided to exclusively release this game on the Wii. I believe it will spoil the family fun image of the Wii."

Of course, the weight of those opinions were offset somewhat by the fact that they came months before any information about the game beyond a few screenshots was even available. Fortunately for gamers in the U.K., the BBFC has taken a somewhat more balanced approach to the matter, giving MadWorld an 18 rating with no cuts required, saying it contains "very strong, stylized, bloody violence."

Based on gameplay videos available on the MadWorld website there's no doubt that "strong, stylized, bloody violence" features prominently on the menu, but so what? The notion that videogames are for kids still persists in some corners, but the knee-jerk reaction to MadWorld, especially coming so far in advance of the game's actual release, was so blatant as to render it irrelevant - except to Sega's marketing department, which no doubt appreciated the free publicity. MadWorld is set for release at the end of March, exclusively for the Wii.