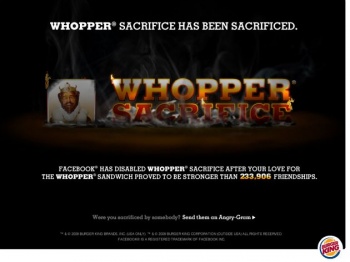 Facebook has banned a Burger King promotion that gave out a voucher for a free Whopper sandwich if users removed ten friends from their Facebook network, claiming the program violated user privacy.

To the ten Facebook friends I deleted last week in exchange for a free Whopper: I'm sorry. The promise of a free Whopper was too much to resist, and our Internet friendships were just not that important to me compared to a free taste of that char-broiled fast food delicacy. It wasn't just me either - more than 233,906 friends were removed last week by 82,771 people who did the same thing I did.

Of course, me coming to you and asking that we rekindle our Facebook friendship has nothing to do with the fact that Facebook just shut down Burger King's promotion and me not getting that free Whopper, no, of course not. "Whopper Sacrifice has been sacrificed," Burger King wrote. "Facebook has disabled Whopper Sacrifice after your love for the Whopper sandwich proved to be stronger than 233,906 friendships."

Apparently Facebook didn't approve of it, claiming that the fact that you guys got messages saying that you'd been sacrificed for a Whopper violated their privacy agreements. "We encourage creativity from developers and brands using Facebook Platform, but we also must ensure that applications follow users' expectations of privacy," Facebook said. "This application facilitated activity that ran counter to user privacy by notifying people when a user removes a friend. We have reached out to the developer with suggested solutions."

Fair enough. Even though I haven't talked to you, Steve Berkovich, in more than five years, I'm sure you were taken aback by the violation of your privacy that occurred when you got the message saying that I cared more about a burger than our meaningless online "friendship". Sure, Facebook could listen to what people like TechCrunch are saying, that "there is no real privacy issue here, just a policy decision by Facebook that people shouldn't be notified when you remove them as a friend," but I apologize all the same. Even though I know that you all would have sacrificed me for a Whopper (but were probably too scared the deletion message would hurt my feelings) and that, if Facebook went back on this decision, I would sacrifice all of you for the burger all over again, let's all be Facebook friends again. I'm sorry the Whopper ever got between us in the first place.