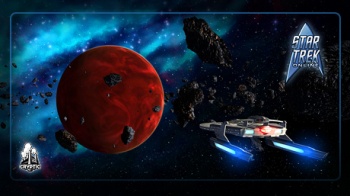 Want to be in the upcoming Star Trek Online beta test? Get in line. If you fancy yourself a writer, though, you might have a shot at a 100% guaranteed beta spot through Cryptic's Planet Exploration Contest, asking would-be explorers to imagine and describe going where No One Has Gone Before.

All right, so we're not exactly sure yet how Star Trek Online is going to handle the whole "crew on a giant spacefaring vessel" thing that fans loved from the various series, but the "beam down to unexplored alien world, punch some stuff and sex up the green chick" aspect should be a bit easier to nail down.

Cryptic is holding a contest for one lucky writer, asking for submissions of under 500 words describing potential adventures on the surface of a barren-looking red planet:

Part of the adventure that comes from exploring strange new worlds is discovering that planet's history and hearing the stories of its inhabitants. Imagine you have just entered orbit around the planet pictured here. Your mind races with the possibilities of what you will find. What is the planet's name? What or who lives there? Are they peaceful or antagonistic, welcoming or outright hostile? Are they long gone leaving only more mysteries to solve?

It's an interesting - and fairly unique - contest, with a nice deal of creative freedom to it. Speaking from experience, though, I can't help but pity whoever has to read all the entries - yes, even the ones that discreetly tell the tale of the forbidden manly love that exists between a captain and his First Officer - and actually pick a winner.