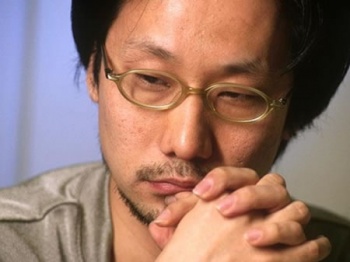 The man behind Metal Gear helps promotes some of his favorite films in Japan.

If you played last years Metal Gear Solid 4: Guns of the Patriots, you've seen that not only does Konami's Hideo Kojima draw most of his influence from famous films, but he loves making them as well. Lots of them, in fact. While some of the films that have shaped Kojima's stories are more obvious than others (Predator, for example), the one common bind is that they're all easily available to a worldwide audience. Japanese media store Tsutaya is currently promoting Kojima's 15 favorite movies, along with a bit of insight and trivia from the man himself. If you're looking to have yourself a Kojima film festival (and I don't mean simply playing one of his games), here are the titles you've got to own.

The Guns of Navarone - The classic World War II thriller that inspired the "espionage action" the Metal Gear series is known for.

The Great Escape - Greatest Steve McQueen movie ever? Another World War II film that tells the real-life story of the attempts of Allied prisoners escaping a German POW camp.

Goldfinger - One of Sean Connery's many Bond films as well as the film that Kojima most credits the creation of Metal Gear to.

2001: A Space Odyssey - Considered to be one of the greatest films of all time, Metal Gear Solid's Otacon was named after 2001's famous artificial intelligence, Hal.

Planet of the Apes - Not the musical, unfortunately, though Kojima does appreciate how it told its tale of society in a piece of entertainment.

The Deer Hunter - Witness the birth of ... Solid Snake's bandanna.

Dawn of the Dead - I don't recall many zombies making their way into the Metal Gear Solid series (Liquid's arm aside), but it sounds like Kojima really enjoys its ... air ducts and closed spaces. Okay!

Full Metal Jacket - Another Kubrick classic, the films female sniper inspired Kojima to try one of his own and thus, Sniper Wolf.

Die Hard - I'm going to guess that it was just the sheer bad ass nature of Die Hard that does it for Kojima.

Predator - Octocamo. Ain' nothing wrong with that.

Black Hawk Down - One of Kojima's biggest inspirations when it came to placing the Metal Gear Solid series in the middle east for its fourth installment.

Children of Men - A critical favorite, Kojima seems to have enjoyed the cinematography here more than anything else.

The Bourne Identity - Hard-hitting action, a return to great car chases and Matt Damon. Hey, what's not to love here?