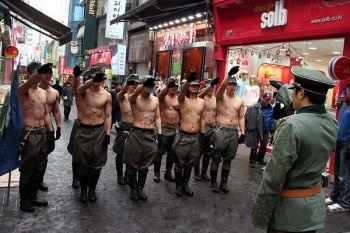 What would you do if I told you that shirtless Korean Nazis were out in force to promote a new World War Two-based MMOG? You'd click the link to find out more!

Karma II is the follow-up to Karma Online, the first (according to Wikipedia, at least) MMOFPS to appear in South Korea. The game takes place in the year 1950 of an alternate timeline, in which Germany has conquered all of Europe and is now squaring off for an epic throw-down with the Soviet Union.

To promote the game, which was developed by Dragonfly, Futureport and Blueside and distributed by Dragonfly, someone decided it would be a good idea to have a live public exhibition with a Second World War motif. All fine and dandy, until the half-naked dudes in Nazi regalia showed up and started throwing the ol' Heil Hitler.

The whole thing seems intensely surreal. Why aren't these guys wearing shirts? Why are they holding an outdoor beefcake show in the middle of winter? And who in God's name decided that marching around in Wehrmacht uniforms and giving the Nazi salute was a good way to promote a videogame?

According to MMOsite.com, people started joining in to take photos once they realized it was a game promotion. Japan, not Germany, is Korea's traditional Second World War bugbear, so maybe this kind of thing isn't weird over there. But it sure looks mighty iffy in this part of the world.