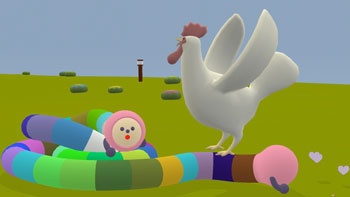 The next bizarre thing from the creator of Katamari Damacy is slithering, eating and excreting its way onto PlayStation Network next month.

If you ask Keita Takahashi, the mastermind behind Namco-Bandai's Katamari Damacy, to explain exactly just what you do in his latest title, Noby Noby Boy, he'll essentially tell you that he has no idea, According to the ESRB (as obtained by Kotaku), however, Noby Noby Boy is "a puzzle game in which players control a large snake-like creature whose objective is to grow by gobbling up objects (e.g., mailboxes, small animals, houses, etc," where accomplishment is determined by "growing the creature as big as possible and then reporting its length to a character in space."

Outstanding. Noby Noby Boy is a PlayStation Network exclusive and will be made available on February 19 for $5. So should you decide that you don't enjoy a game where you play as a technicolor worm whose sole purpose is eating and pooping objects, at least you won't be out much.

There is more to Noby Noby Boy, however, as Namco-Bandai explains that there's a meta-game element to the title. As players stretch their glow worm to unimaginable proportions, they in turn unlock "new game stages" for all other players online. As you complete various goals within the game, the new King of All Cosmos character, currently known only as "Girl," will grow along with you and the combined length of all PlayStation Network Noby Noby players.

Sound interesting? Fantastic. Now just make sure to check it out or else the rest of us suckers will totally be boned out of new content.

I Have Seen The Future, And it is Annoying Shamus Young 123 Comments