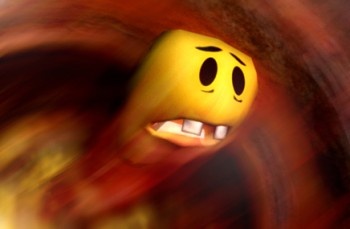 The National Academy of Digital, Interactive Entertainment in Denmark has put together a few unusual projects for your enjoyment, including a first-person dish washing game, a cab driving simulator that has you facing the back seat and a story about a little piece of corn fighting his way to the anus, and to freedom!

DADIU, which apparently translates into the National Academy of Digital, Interactive Entertainment in Danish, is a collaboration between nine universities and three art schools in Denmark. According to Darren Gladstone of PC World, DADIU selects about 70 students from across the twelve institutes to take part in the program each year, as a supplement to their normal studies. Begun in 2005, the course splits the students into five or six teams that function like small game studios; the teams are provided with hardware, software and the Source engine, and then have one month to produce a game.

And what did they come up with this year? First, we have It's MimeTime! But rather than giving people the opportunity to gun down as many mimes as possible as we imagination-stunted American gamers might expect (or hope for), It's MimeTime! puts players in the role of a female mime in Paris who must earn money by miming her way through an invisible maze. The catch? The maze actually exists - it's just invisible. To do well, gamers will have to memorize the maze as they navigate toward coins in order to take part in "mime challenge" mini-games like weightlifting and rope-pulling.

If mimes don't do it for you, there's always A Corny Voyage, a racing game that takes place inside the human body. I'll let the website speak for itself: "A little scared piece of corn is blasting through sh*t at high speed in the human intestines! Can you manage to get out in time, or will you be violently digested? Remember one thing: When you see the anus, the end is near - and you're victorious!"

Then there's Karma Cab, a rhythm game described as "not unlike Guitar Hero," presumably if Guitar Hero was about an angry Indian cab driver. Players look into the cab instead of out, and money is earned not by getting fares to their destinations but by engaging them in rhythm-game-style conversations. The object, naturally, is to make as much money as possible, as either "the bad-ass cab driver or the nice do-gooder of Karma Cab."

Finally, there's Dish Washington, "a funkalicious first-person dish washing wonder!" As the groovy crocodile Dish Washington, players will turn kitchen chores into a rocking party. "Get groovy to the beat, grab your brush and boogie those stains back to the Stone Age. No stain, no game!" Dish Washington earns particular distinction as a finalist in the 2009 Independent Games Festival Student Showcase.

Europe, eh? And no, I'm not making any of this up. In fact, all of these games are freely available at the DADIU website, requiring only a Steam account in order to play. Mimes, corn chutes and raging cab drivers: What's your favorite?