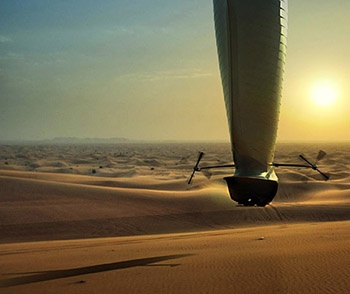 That long trek to Canterbury Commons getting you down? Why not take the sting out of it (and avoid Deathclaws) in your own dirigible?

Sadly, the Aeolus Airship isn't available in Fallout 3 just yet, so you'll just have to make do with boring old real life.

The airship was designed by Christopher Ottersbach, a student at the Braunschweig University of Art in Germany. It can stay aloft for up to two weeks on a supply of helium and is steered by way of pedal-powered air screws, allowing its crew of up to four people to quietly glide through the skies without leaving a trace.

The concept craft is designed to be more aerodynamic than conventional airship designs and its svelte shape and fold out prop allows it to touch down in places without airports, like say, the Capital Wasteland.

GDC 2014: Getting Past the "Ship With Shame" Stage at Bethesda Encaen 7 Comments
Comments on