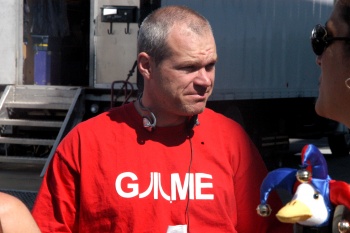 Everyone's favorite movie director Uwe Boll has earned a lifetime achievement award from the Golden Raspberries, recognizing his work on such classics as Alone in the Dark, BloodRayne and In the Name of the King: A Dungeon Siege Tale.

Boll is being "honored" by the Golden Raspberries, better known as the Razzies, with a Worst Career Achievement award for his work in the movie industry over the past 18 years. He began his career in his native Germany with films like German Fried Movie and Barschel - Mord in Genf? but didn't come to the attention of gamers until the 2003 release of House of the Dead. His reputation quickly grew, however, with the subsequent releases of game-themed movies including Alone in the Dark, BloodRayne and his most successful film to date, Postal.

Boll's selection for the award reflects not only his skill as a movie director but also his penchant for overexcited, profane and sometimes violent responses to his critics. Putting Boll over the top, according to the Razzies website, was the 2007 "videogame-based fiasco In the Name of the King: A Dungeon Siege Tale, which grossed under $5 million on a $60 million budget."

Making the award particularly noteworthy is the fact that it will be the first one handed out in over 20 years, since Bruce the Rubber Shark won in 1988 for its work in Jaws, Jaws 2, Jaws 3-D and Jaws 4. "It's a great honor for me to get the same prize the rubber shark from Jaws got," Boll said.

But the award doesn't signify that we've seen the end of Boll and his movies; the prolific director has numerous projects on the go, including game-based movies like Alone in the Dark 2, Far Cry, BloodRayne 3 and Zombie Massacre. Despite all he's accomplished so far, the worst, no doubt, is yet to come.