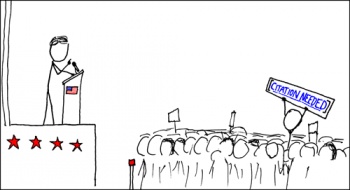 Perhaps in response to the threat posed by Britannica, Wikipedia is seeking to change its editorial policy, but not everyone approves.

Jimmy "Jimbo" Wales, the founder of Wikipedia, is proposing a system of flagged revisions, which would mean any changes made by a new or unknown user would have to be approved by one of the site's editors before the changes were published.

Whilst the timing seems to coincide heavily with Britannica's recent announcement, the scandal caused by edits of the pages of Senators Robert Byrd and Edward Kennedy giving the false impression that both had died was also a motivating factor.

Jimmy Wales' stance has been that the shift in philosophy would eliminate the "nonsense" of the false reports and said he wanted the changes to be implemented as soon as possible.

"To the Wikimedia Foundation: per the poll of the English Wikipedia community and upon my personal recommendation, please turn on the Flagged Revisions feature as approved in the poll," he said in a statement.

The problem is that this is a radical departure from the original Wikipedia philosophy that allows anyone to make changes to almost any entry. A flame war has broken out across the editors, most of whom are saying that the flagging system is unworkable.

One user posted that "Enabling Flagged Revisions will undoubtedly create backlogs that we will be unable to manage" while another said that there were "gaping holes in what you propose to do."

Watching the row develop into attacks, "Jimbo" then offered a compromise: those who were opposed to the changes could make "an alternative proposal within the next 7 days, to be voted upon for the next 14 days after that."

The German Wikipedia has been using flagged revisions for almost a year now, but critics have said that the system is very labor intensive and comments can take weeks to appear.

The Perils of the Information Age Sean Sands 5 Comments