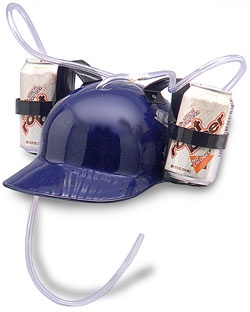 We've all cheered when we hear the "Level Up" sound, but does this carry over into real life? New Scientist thinks so.

In an experiment, 22 volunteers took part in a "sports drink delivery test." Each of the volunteers were then given a laptop with a bicycling game, and a drink-dispensing rig that put two straws in their mouth. If computer cyclists from their team passed them by, one of the straws would give them a sports drink. If an enemy cyclist passed them by, then the drink would be salty tea.

Three days later, the same volunteers came back for a follow-up brain scan and a surprise test. Before the scan, each subject was told to sit in a waiting room with two chairs, both with small towels dangling on one arm. One seat corresponded to the insignia of the friendly jersey, the other to the enemy symbol.

Nearly 75% of the armchair cyclists sat on the seat corresponding to the juice jersey, with most of the subjects saying that they didn't consciously notice the towels at all. The same 75% scored lower on tests of impulsivity.

Under a MRI scan later, the part of the brain responsible for responding to bad taste lit up as soon as the volunteers were shown an image of the enemy jersey.

While fantasy scenarios pre-empting real life actions won't be unusual to anyone who has read about the Stamford Prison Experiment (where people assigned to be guards started seeing "prisoners" as beneath them), no-one had shown that videogames can train the kind of conditioned responses that underlie much of our behavior.

The leader of the study, Paul Fletcher, a neuroscientist at Cambridge University, England, said "Our research suggests whatever you've learned in the computer game does have an effect on how you behave toward the stimulus in the real world."

"I don't think this is evidence that video games are bad," says Fletcher, a former gamer. "We just need to be aware that associations formed within the game transfer to the real world - for good or bad."

Juice or salty tea may have helped form the associations, but Deborah Talmi, a neuroscientist at University College London, suspects the connections could have formed without their help.

"Many virtual things activate very real representations in the brain," she says. "For instance, online donations to charities activate the same reward center - the nucleus accumbens - that is activated to food reward in rats."