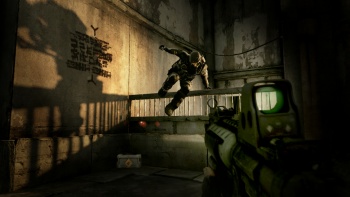 Handy with Photoshop and got a knack for making a game look better than it actually does? Activision might just have the job for you.

Everybody knows that screenshots for games get touched up as much as pictures of any girl in Maxim. Though gamers have had plenty of fun mocking the transparently fake nature of doctored screens, developers have almost never admitted to the practice of creating "bullshots." Activision, however, seems to be so desperate to hire someone to make bullshots that it's willing to come out in the public and admit to the practice.

From the "Other" category of the posting, however, comes this: "Perform advanced retouching of screenshots and teach skills to others as needed." Aha! Caught red-handed. Keep in mind that in order to qualify for the job, you need to be "even-tempered and able to interact well, under pressure, with multiple teams on multiple projects with tight deadlines" and handy with Photoshop CS3 and 3ds Max and Maya. They'll be looking for a demo reel, so open up some Perfect Dark Zero screenshots and make them bloom! That'll show 'em what you can do.

All kidding aside, I'm not going to rag on Activision for making bullshots - it's such common practice that most of us know better than to be duped. I'm just surprised the company is clumsy enough to accidentally admit to it like this.