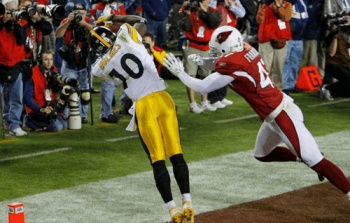 No, not the actual John Madden. EA's annual Madden NFL Super Bowl simulation was right on the money, correctly predicting that the Pittsburgh Steelers would triumph over the Arizona Cardinals in Super Bowl XLIII - and just barely missed nailing the actual score.

Since 2004, Electronic Arts has been using its blockbuster Madden NFL series to predict the Super Bowl before it actually happens - and with the exception of last year's Giants-over-Patriots upset, it's been astoundingly accurate. In 2009, though, the simulation was once again on the ball (so to speak).

The interesting thing isn't that its prediction - that the Steelers would beat the Cardinals - was correct. After all, the Steelers were heavily favored from the outset, with no one quite sure how the Cardinals were in the championship match in the first place. What is interesting is how close the simulated score was to the actual thing: Madden's final outcome was Pittsburgh Steelers (28), Arizona Cardinals (24). Last night, the final numbers were Pittsburgh Steelers (27), Arizona Cardinals (23).

Maybe it's just dumb luck. After all, who could have predicted things like James Harrison's end-zone interception and subsequent 100-yd touchdown run - the longest play in Super Bowl history? Even so, as in-game AI gets better and better, and sports games become closer and closer to perfectly mimicking their real-world counterparts, one can't help but wonder if the game's predictions will become more and more accurate.