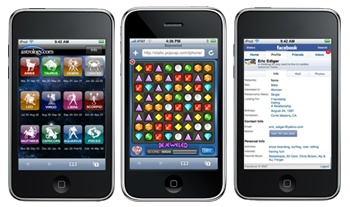 A report by comScore reveals that of all mobile game downloads made in November, 14 percent were done on Apple's iPhone.

There's absolutely no question that when it comes to mobile phone gaming, Apple's device is currently the cream of the crop. From its high-quality content, ease of development and the power of Apple's advertising dollars behind it, nothing quite compares to the "Jesus Phone." In a report filed late last week by the prominent market research company, comScore, it has been revealed that of all mobile game downloads made in the month of November 2008, 14 percent were made with an iPhone. To put that in perspective, 8.5 million people downloaded games onto their mobile devices (up 17 percent month-over-year), which means roughly 1.2 million iPhone users out there are playing games. That's a lot of Rolando, if you know what I mean.

Not only is the iPhone trouncing its competition (most of which comes from the Blackberry Curve and other smartphones), but it also seems to be decimating the average attach rate of games to cell phones. The industry average for a phone with gaming capabilities to be used to download games is only 3.8 percent, yet 32.4 percent of iPhone users report having downloaded a game within the month of November. This could very well mean free trials of games or paid purchases, as the report isn't specific, but getting that many folks to try out a game on their cell phone is an impressive feat all its own.

With so many of its users excited about iPhone gaming, its no wonder why its games make such headlines, even for something as simple as an update to Fieldrunners. It seems as though the whole "iPhone as a gaming platform" talk gets less and less crazy sounding by the day.