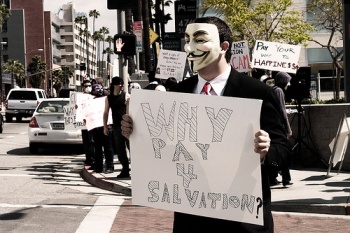 Germany may have been the first to declare Scientology a cult, but France has brought the Church to court on charges of organized fraud, according to France-Info radio.

If the CoS (Church of Scientology) is found guilty, the church could be declared illegal and disbanded. France hasn't outright banned it before, as authorities have considered it a sect, rather than a religion.

The charges themselves come about from the "illicit arguments and procedures" that CoS uses to sell its products and services, with the "Fair Game" policy likely to receive a lot of the flak.

The "Fair Game" policy itself, in the words of the founder L. Ron. Hubbard, states "the law can be used very easily to harass ... The purpose of the suit is to harass and discourage, rather than to win - if possible, of course, ruin [the target] utterly." He later retracted the policy with respect to "bad public relations."

On the side of CoS, there has been an argument from the public prosecutor that the charges should be dropped because the officials of the Church of Scientology did not personally benefit from the organization's revenues. I'm sure Bill Gates doesn't benefit from sales of Windows either.

The trial is scheduled for May 25th. Let's just hope the jury isn't all wearing "V" masks.