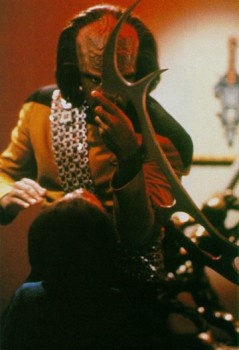 Colorado Springs police are on the lookout for a convenience store robbery suspect described by witnesses as wearing blue jeans and a black jacket, with long, unkempt hair, sharpened teeth, distinct forehead ridges and a surly disposition.

KMGH Denver reports that the suspect knocked over two 7-Eleven stores in Colorado early this morning, the first at 1:50 am and the second at roughly 2:20. And while he may not have actually been a Klingon (yes, I made that part up) he did commit his crimes using a bat'leth, a traditional Klingon sword.

The "Sword of Honor" is a crescent-shaped weapon, with hand-holds along the outer edge and spikes protruding from the bladed inner edge. The first bat'leth was forged by the Klingon hero Kahless, who placed a lock of his hair into the molten lava of the Kri'stak Volcano, then plunged it into the Lake of Lursor, twisting and forging it into a weapon. With it, he defeated the tyrant Molor and united Qo'noS, an act which would ultimately lead to the foundation of the mighty Klingon Empire. Modern bat'leths are typically forged from baakonite and although they are primarily a ceremonial weapon, many Klingon warriors are well-practiced in their use and take part in ritualized tournaments that test their prowess and skill with the blade.

Whether or not the thief knew any of this as he embarked on his criminal career is an open question, but it's safe to say that brandishing the weapon made famous by Lt. Worf made an appropriately nerd-worthy impression on one of the clerks he approached: While the suspect made off with an undisclosed sum from the first store, the attendant at the second store apparently refused to take him seriously and the would-be warrior meekly withdrew, empty handed. I guess shouting "nob jiH Huch!" isn't as intimidating as it looks on television.