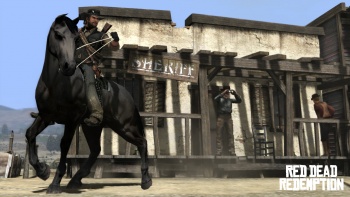 Red Dead Redemption, the sequel to 2004's original Wild West shooter is coming this fall, Rockstar announced today. There will be blood. There will also be revolvers, dead people, and redemption.

There are not nearly enough cowboys in videogames. We're up to our necks in space marines, ninjas and space marine ninjas, but, as Paula Cole once asked, where have all the cowboys gone? There have been occasional blips on the cowboy games radar, sure, most noticeably last gen with the release of GUN and the first Red Dead Revolver, and this gen with Call of Juarez, not to mention the Western themed Half-Life 2 mod A Fistful of Frags, but still there aren't nearly enough lone riders in the gaming landscape.

Now it's looking like there's going to be a second wave of Wild West videogames. Call of Juarez is getting a sequel, and, Rockstar announced today, Red Dead Revolver is getting one too. Titled Red Dead Redemption and developed by Rockstar San Diego, it's scheduled for release this fall for the PS3 and 360.

The first Red Dead Revolver had some good ideas and a perfect Sergio Leone atmosphere but it didn't really blow anyone away. It was really just a solid cowboy shooter with Max Payne bullet time and some skillful presentation. With Redemption, Rockstar looks to be widening the scale of the franchise by a huge margin with an open-world environment filled with "an endless flow of varied distractions." Set at turn of the 20th century as the Wild West declines, it casts players in the role of former outlaw John Marston.

"The team at San Diego have massively exceeded our expectations with the sheer depth of experiences in Red Dead Redemption," Rockstar founder Sam Houser said. "The seamless combination of breathtaking beauty and intense action, all woven together with strong plotlines in a massive vibrant, rural environment is mind-blowing. We think this game helps to push the limits of what an open-world gaming experience can be."

Let's just hope it's not just Grand Theft Auto IV with a Wild West skin slapped on. I can see it now: I'll be riding around town when a man runs up to me and hands me a telegram: "GOOD DAY CAHZIN STOP LET US RIDE TO THE BURLESQUE STOP WE WILL DRINK DOWN SASPARILLA STOP AND ENJOY THE WILD AMERICAN TITTIES STOP."