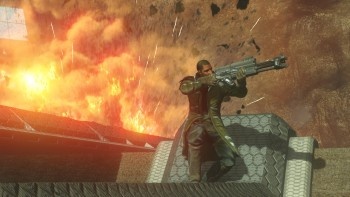 If you're tired of getting your ass kicked in Team Fortress 2, try fiddling with your monitor; Swedish researchers have found that the color of game environments has a measurable impact on a player's performance.

In a study published last year, researchers Igor Knez of the University of Gävle and Simon Niedenthal of Malmö University compared the impact of warm (reddish) and cool (bluish) lighting in game worlds on the "affect and play performance of gamers." The results? As has apparently been shown in earlier research, playing in a warmly-lit virtual environment yields a noticeably higher rate of ass-kickings-per-minute.

"It was shown that the players performed best and fastest in a game world lit with a warm (reddish) as compared to a cool (bluish) lighting," the research abstract says. "The former color of lighting also induced the highest level of pleasantness in game users. A regression analysis indicated tentatively that it was the level of pleasantness induced by the warm lighting that enhanced the players' better performance in that digital game world."

Further, it appears that the improvement actually increases with the skill of the player; "high-skilled" players, who typically engage in 2.5 times more gaming per week than medium- and low-skilled gamers, get a larger boost from appropriate environmental lighting. "Given their skill, they performed significantly faster and felt significantly calmer and more relaxed in doing so," the abstract says.

The results appear to dovetail nicely with research reported last year that found the Red Team was statistically better than the Blue Team. It would seem that whether it's wardrobe or mood lighting, red just makes players better. Now if we could only do something about all those god-awful browns that seem so popular these days.