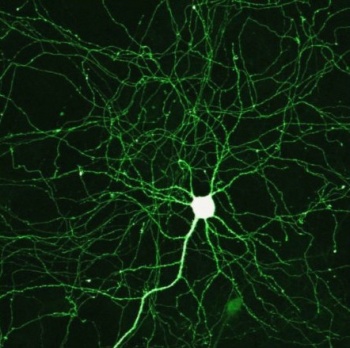 Scientists in Edinburgh, Scotland, have found a way to grow neurons on specially treated silicon chips.

The chips have a fine pattern of grooves which, when dipped into a patented formula of proteins, allows neurons to develop along the pathways. The neurons themselves are the basic cells of the human nervous system, and with enough of them, scientists can start producing new muscle or nerve fibers.

Stem cells can also be formed in a similar way.

It's hoped that the technique will one day allow for prosthetics to be grown in the laboratory for implanting into patients.

"This is a small but important step on the path towards the long-term goal of many scientists and medical experts - to develop surgical implants using silicon chips," said Professor Alan Murray, head of Edinburgh University's School of Engineering and Electronics, who led the research. "It is going towards the realms of science fiction - there is a definite 'Incredible Hulk' feel about it."

He added, "We also hope that, rather sooner than this, the technique will allow better methods of drug discovery and reduce the need for animal testing, as new medicines could be tested on chips rather than in live creatures."

While we're not talking about BioShock's plasmids just yet, the possibilities are there, and for those afflicted with degenerative conditions (like Parkinson's disease), the solution to their problems is a lot nearer.