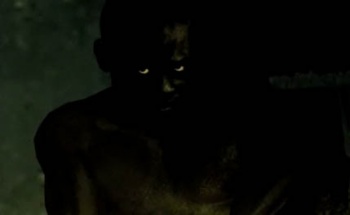 New impressions of Resident Evil 5 from Eurogamer and others have reignited the debate over whether or not the game's portrayal of Africa and its people is racist.

Just when Capcom thought it might be able to release Resident Evil 5 without seeing this debate rear its ugly head yet again, Eurogamer has published a preview of the game that makes some pretty alarming claims about the game's arguably racist imagery. Writing that "there's imagery in here that goes beyond the general air of foreign menace that caused a ruckus in the first trailers," Eurogamer's Dan Whitehead goes on to describe a scene where protagonist Chris Redfield comes cross a gang of men beating something in a sack. These men are not the "infected Majini," they are "ordinary Africans, who stop and stare at you menacingly as you approach...where Africans are concerned, the game seems to be suggesting, bloodthirsty savgery just comes with the territory."

Whitehead goes on to describe a moment later in the game where a white blonde woman is violently dragged off by black men, a scene he says is completely irrelevant to the plot, that plays "so blatantly into old cliches of the dangerous 'dark continent'...you'd swear the game was written in the 1920s." Later on, Whitehead says, there are even more "outrageous and outdated images." He also remarks that the image of Sheva, Redfield's partner in the game and a light-skinned, English-speaking African, fits into accepted Hollywood standards for black heroines, and "compounds the problem rather than easing it."

Eurogamer isn't alone in its reactions. Posting on the NeoGAF message board, Gamasutra's Chris Remo wrote that "Nick [Breckon, of Shacknews] (who played the same stuff as Eurogamer) independently had similar reactions."

Reactions to Whitehead's impressions, as to be expected, have been decidedly split. Some argue that it's entirely a non-issue and that the debate stems for over-sensitivty. "Man if this game was taking place in Canada and had white people doing this, no one would complain," GAF poster Pedobear said. "It seems every single time there is something related to violence in Africa it's automatically racism. It's a f***ing videogame. Give me a break."

Others seem to be more upset that Capcom would be ignorant enough, even after the initial controversy, to keep such insensitive material in the game. "What's most offensive about this to me is that there are so many ways to do a zombie game in Africa in a manner that either skirts the obvious racial types or that cleverly exploits them," sonicmj1 wrote. "This news seems to show that Capcom had no idea what they were actually doing when they were including these sorts of images in the game."

Whatever the angle you take on the debate is, there's no doubt that it's a complicated one. What do you guys think?