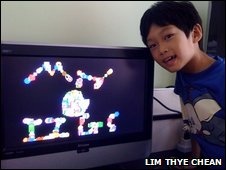 A nine year old Malaysian boy has written a finger-painting application for Apple's iPhone. As if the world didn't already have plenty of ways to make you feel inadequate.

Lim Ding Win, who lives in Singapore with his family, has created the Doodle Kids application, which lets iPhone users create works of art with just their fingers. The application, originally written for his two younger sisters, has been downloaded over 4,000 times from the iTunes store.

Ding Win first started using a computer when he was two years old, discovered programming at age seven and is now fluent in six programming languages. Ding Wim's father, Lim Thye Chean, who also writes iPhone applications, downplayed his son's achievements: "Ding Wen is an above average boy with an interest in computers, especially Apple IIGS and Macs, likes to do programming, and that's it. Doodle Kids is an extremely simple program that can be done by anybody. Everybody can program - if Ding Wen can, so can you."

Sure, whatever you say Mr. Lim. I'll be over here, feeling sorry for myself.