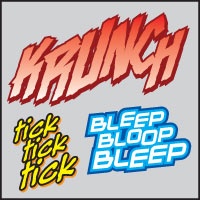 Ever wondered why comic books needed someone just to do the lettering? Well, it turns out it's a lot more complicated than you might think.

The lettering in comic books can add a surprising amount of atmosphere to a comic, conveying not only nuances in dialogue, but also grant insights into character. From the fourth-wall-breaking yellow speech bubbles of Deadpool to Todd Klein's inspired creations in Neil Gaiman's seminal Sandman comics, lettering is a fine art whose secrets are beyond the ken of mortals.

Until now that is! An article on Blambot.com, a site that provides comic book fonts, reveals the various conventions used in comic book lettering, explaining the recommended length of tails on speech bubbles, the proper use of crossbars on "I's" and a whole load more.

It's an interesting read, and gives an insight into something that most of us have probably never even spared a thought.