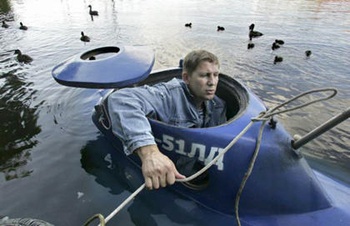 Oppressive regimes are a regular feature in videogames, but few of us know what is actually like to live in one. Inventor Mikhail Puchkov sought to escape the drudgery of Soviet Russia, by taking to the waves, both above and below them.

Puchkov began work on his one man submersible in the early 80s during the tenure of Leonid Brezhnev, as a means if escaping the stifling Communist regime, if only for a little while. Puchkov said of the project, "I was not satisfied with the fate that was laid out for me. I wanted to satisfy myself and to have some respect for my life. If I learned to respect myself, I felt it would be easier to find my niche in life. I didn't know it would work. I just hoped."

Puchkov's sub can sail 100 miles a day and submerge to 30 feet. The sub can travel as fast as four knots and can make an underwater trip from St. Petersburg to Helsinki, Finland and back without stops. Puchkov worked in secret in the dead of night and after ten years of trials and refinement, took to the open seas in 1994, making a secret trip to Kronshtadt, a closed military base in the Gulf of Finland. His drive and creative vision have made Puchkov something of a minor celebrity in his home of St. Petersburg, so much so that Aleksandr Kiselev, a Russian documentary filmmaker, is in the process of making a short movie about his life and inventions.

The success of Puchkov's submarine is a testament to what you can achieve with a little ingenuity, and a lot of determination.

The Needles: The Russians Are Coming! Andy Chalk 32 Comments

For Science!: 7 Tesla Inventions That Others Took Credit for Rhykker 19 Comments
Comments on